What is ‘blunt force’, and what type of injuries can be the result?

Please let me answer this question in the shortest possible way, without throwing some hyper intellectual medical terminologies at you, I don’t understand myself. Let me do it in reasonable simple and understandable terms, and more importantly, within context of this article.

Blunt force trauma is also the consequence faced by homeland and private security professionals after being hit by a solid object, such as a fist, foot, knee, elbow, iron bar, extendable baton, baseball bat, crowbar, brick, bottle, can, chair, fire extinguisher, to name but a few, or indeed after being pushed hard against another solid object e.g. door, wall, floor or car or down a flight of stairs etc.

Something that remains widely underreported since shootings and stabbings seem to make more dramatic headlines in the mainstream media.

When asking a couple of law firms how they would define ‘blunt force trauma injuries’ they responded with the following answers:

“A severe traumatic episode caused to the body (or head) with the sudden introduction of a blunt instrument used with great force.”

“Blunt force trauma is when the body is hit with an object that is blunt, or not sharp, with enough force to cause significant damage”.

According to Wikipedia, blunt abdominal trauma (BAT) comprises 75% of all blunt trauma and is the most common example of this injury.

The severity of such injury is mostly determined by the speed, velocity, size and weight of the object, and can range in severity from a tiny bruise to internal haemorrhages, bone fractures, cardiac tamponade, airway obstructions/rupture, and in the worst-case scenario result in ruptured organs, rapid internal bleeding and ultimately your death. 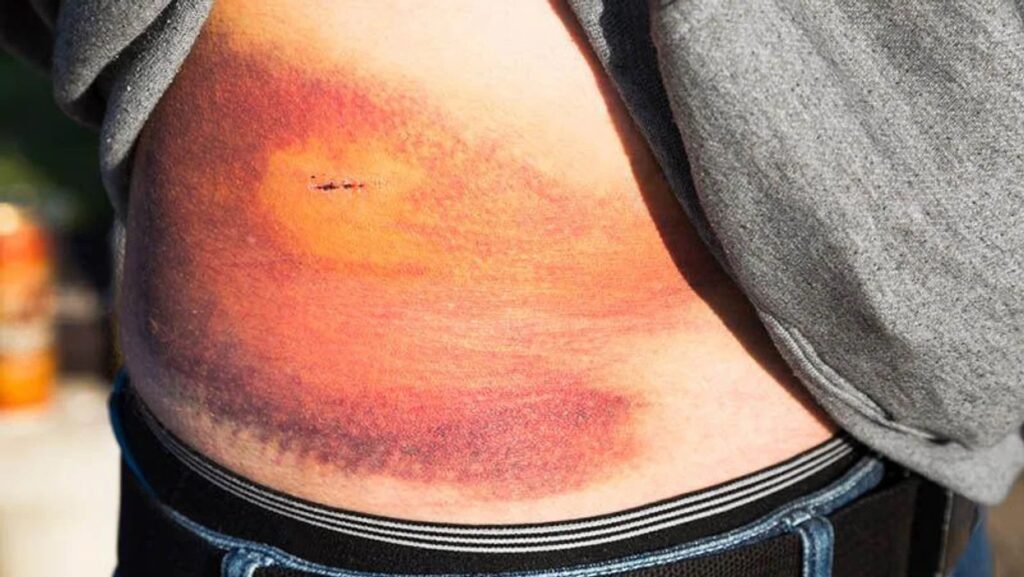 I do believe most security professionals will be aware of the potential severity of injuries resulting from blunt force. But I don’t believe many will chose to document and report every incident of this nature. “Too much admin”, some may say, and “it’s part of the job”, others will state.

Many security professionals have a reasonable understanding of the most realistic risks and threats they face, and subsequently are either being issued, or they themselves invest in certified stab vests or body armour.

However, it is worth noting that any type of flexible body armour made from either an aramid fibre (i.e. Kevlar®) or a polyethylene (i.e. Dyneema®) including the latest high performance body armour produced by top secret manufacturers at top secret locations for top secret agencies, do not offer anywhere near enough protection from this specific operational risk.

On a domestic level (meaning homeland or private security, rather than military) the risk of being punched, beaten, kicked, or faced by someone throwing stuff at you is hundred times higher than being stabbed or shot.  Therefore, it is rather saddening to see that more than 99% of body armour issued to domestic homeland security professionals offer insufficient protection from this specific risk.

Again, in the context of a good body armour, the key objective must be to offer sufficient levels of protection from the most realistic threats and risks you faces whilst on duty.

I urge you to make a conscious decision when investing in such type of PPE.  Simply ask yourself the question, what is the most important criteria for YOU?  The concealability, the weight, the thickness, or the level of protection from the risks and threats you have identified?

If the concealability of a body armour is key for you (i.e. covert operations and surveillance) then you may well need to look for the thinnest body armour, and the ‘blunt force trauma’ protection may have to become of secondary importance.

However, please understand that in general the most likely risk you face on a daily basis, is also the one you should seek protection from, and as I have stated earlier on in this article, the probability of you getting punched, hit, kicked or pushed around or have someone throwing stuff at you is far greater than the risk of being stabbed or shot.

To achieve the maximum level of protection from blunt force trauma injuries a body armour would have to be of a rigid structure, rather than a soft/flexible structure. Two diverse protective devices which highlight in a brilliantly understandable way the importance and the effectiveness of such protection are:

This great piece has raised important questions regarding the protection afforded to officers wearing personal body armour, along with the current test methods used to assess the true performance of the equipment. Some test results showed that some revealed deformations exceeding the NIJ Standard’s backface signature limit. Such increased deformation can lead to serious injuries, including blunt force trauma or backface signature injuries, which have occurred in the field over and over again.

Although your body armour might be successful in containing the round fired by a weapon or the knife thrusted at you by a hostile individual, it might not protect you from the impacting energy during other types of assaults, unless it is offering you officially certified protection from this precise risk.  The most respected standard for body armour in relation to blunt force trauma protection is Germany’s VPAM (Vereinigung der Prüfstellen für Angriffshemmende Materialien und Konstruktionen) Standard, titled: “Testing of Impact Resistance against Throwing and/or Striking Objects” and its rating will be W1 (lowest) – W9 (highest).

It is also worth pointing out that our Technical Director Colin Mackinnon, a man who served 26+ years with the UK’s Police Forces, delivered an online presentation to a large audience of security professionals recently.  Following his presentation, he asked a question: “Does your armour protect against knife, spike, needle, and blunt force trauma?”

Out of those questioned 55% of people did not know what protection their vests provided.

Robert Kaiser is the CEO and Founder of PPSS Group, a UK headquartered company specialising in design, production, and supply of high-performance body armour. Robert and his senior team all have significant level of operational frontline experience in military, law enforcement or homeland security.  His written word has been featured in several industry leading, international publications.