To explain why I personally believe we have to find ways to effectively improve the safety of paramedics and why I believe stab resistant vests should be issued to paramedics, ambulance crews and emergency medical technicians (EMT) please let me draw your attention to some recent facts and figures as well as news headlines:

On 16th November this year (2017) the British newspaper ‘Evening Standard’ wrote the following:

“At least one paramedic is physically attacked each day in London, shocking new figures have revealed… crews recorded 534 assaults between April 2016 and March this year, up from 456 across the same period the year before.”

The British Newspaper ‘The Mirror’ reported on 7th January 2017:

“A total of 2,300 paramedics and ­ambulance technicians reported being attacked on duty last year – a 47 per cent hike in just five years.”

Jonathan Fox is ex-spokesman of the Association of Professional Ambulance Personnel, a Paramedic with more than 30 years of operational front-line experience in London and a good friend of mine. I explained to him that I was writing this article, and asked for his personal and professional opinion on body armour and he responded as follows:

“You can never eliminate the risk of assault on staff. The risk of injury can, however be minimised significantly by the provision of body armour for front-line ambulance personnel. Good radio communication, computerised flagging systems relating to previous violent incidents by specific individuals, national physical assault reporting systems and conflict resolution training are measures commonly used in the work place. These measures are however undermined by the absence of body armour provision, which provides effective personal protection completing the package of measures necessary for a safer working environment should the worst case scenario occur.”

I do, of course, full-heartedly agree with his comment.  However I do not agree with this comment because I am the CEO of UK based PPSS Group, a firm specialised in the design, development and manufacturing of high performance body armour and subsequently financially benefit from the sales of such, but rather for three following reasons:

In December 2011 I have reported in one of the world’s leading ‘Homeland Security’ publications that the, at that time called NHS Security Management Service (SMS) confirmed 1,262 physical assaults against ambulance staff in England during 2009/10. A year later NHS Protect announced that 1,630 physical assaults have been committed on ambulance staff in 2011/12 which is without question a significant increase.

Then… years later… today… we read the above headline: “At least one paramedic is physically attacked each day in London, shocking new figures have revealed… crews recorded 534 assaults between April 2016 and March this year, up from 456 across the same period the year before.”

We must accept the simple matter of fact that front-line ambulance professionals who deal with potentially intoxicated and hostile members of the public are working within a higher risk environment, especially when operating a night times, when the risk of alcohol or drug related violence increases, hence they are more likely to overreact to anything a paramedic says or does.

Dealing with highly emotional individuals who might feel you are not arriving at their premises within their expected time frame, or you are not doing your absolutely utmost to assist their family member can also put you in the firing line.  This might be absolutely out of your hands, and even you kind personality, your warmth, your willingness, your in-depth understanding of the subject matter and any on-hand alarm, training and policy will not make a difference if this human being overreacts and commits a physical assaults he or she may well regret the following day for the rest of his or her life.  This is reality!

However in the UK most Ambulance Trusts are still opposed to issuing any type of body armour e.g. stab resistant vests. Apparently some sorts of research projects conducted by NHS Ambulance Trusts have concluded that body armour could be perceived as too confrontational, aggressive of authoritative.  I think this is ludicrous!

Andy Farrall FIIRSM CMIOSH MIIAI MInstLM, who spent 12 years in the ambulance service (1978-90) is Founder/ Director of Management & Safety Training Ltd. He responded to my article and said:

“A point of law which ambulance services (both private and NHS) need to bear in mind is that the employer is responsible for risk assessing all operational activities and putting into place reasonable safety controls (and, of course, I’m paraphrasing the legislation here). Body armour is classified as Personal Protective Equipment and could be a viable control measure in certain cases. If a paramedic is injured on duty by an assault then it is reasonable to ask to see the risk assessment for that activity and, if no PPE has been specified, to ask why not? Simply put, failure to do all “so far as is reasonably practicable” to keep staff safe is a serious criminal offence – and the NHS is not exempt from such a prosecution. Buying body armour would be a lot cheaper than meeting the potential fine!” 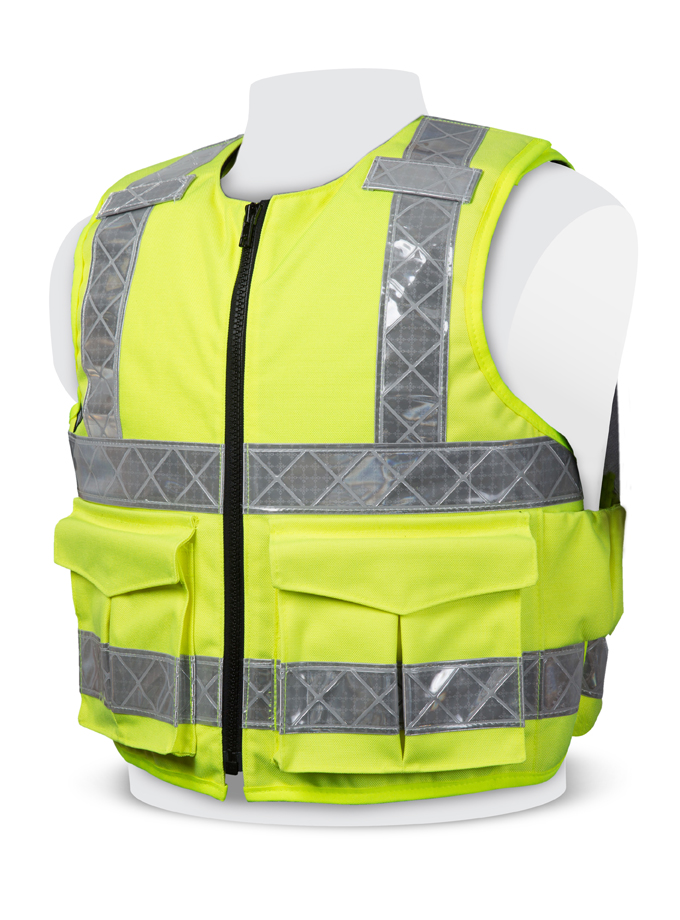 Why has no one approached us as a respected body armour manufacturer, asking us to design and develop outer covers that look like high visibility vests, making no real visual difference to the design of current jackets worn by paramedics up and down the country?

How is it possible that here in the UK only the London Ambulance Service NHS Trust are issued with stab resistant vests, but other UK based Ambulance Service NHS Foundation Trusts are not issuing stab resistant vests to front-line paramedics?  Are we trying to say that paramedics in London are at risk, but paramedics in Manchester, Liverpool or Birmingham are not?  I know personally enough about operational risks in these cities to know that paramedics in other cities also require appropriate personal protective equipment (PPE) because of the risk of ‘unforeseen circumstances’.

In the UK we have one primary risk which all Ambulance Trusts seem to overlook, and that is the risk of blunt force trauma injuries. It is a matter of fact that an incident involving a punch, kick or blow is a much more likely than the risk of being faced by someone waving a firearm or edged weapon at you. Not many aggressors leave home with the intention to shoot or stab a paramedic at some point during the day or evening.  Most confrontations faced by ambulance professionals escalate from one second to another, there are no warning signs, there are no computers able to tell you don’t go there and there are no signs on the door saying ‘here lives a dangerous or very angry or frustrated human being’.

A paramedic might attend the scene of an incident and some minutes later be confronted by a hostile member of the patient’s family or one of his drunk friends who express his anger. For any of the previously highlighted or other reasons they might make you responsible for the suffering of a loved one, however, it is much more likely they will express their distress with a punch, hard push or impulsive kick.  They might grab something nearby, anything like a glass, stick, remote control or vase to hit you on your back whilst kneeling down doing your utmost to assist the injured person.

Ask yourself, how many paramedics do YOU know that have been shot or stabbed?  More than a handful?  Now ask yourself another question, how many of your colleagues have been punched, kicked or got hit my some sort of object?

Can such type of assault lead to serious injuries?  YES

Is the risk or probability of such incident limited to London and are we saying these incidents are unlikely to happen in other cities in this country?  NO

One paramedic, who wishes to remain unnamed, sent me a message today:

“I am a 52 paramedic, based around 300 miles outside London, with over 22 years’ service. After being attacked to such an extent that I feared for my life last year I asked my service to supply me with body armour. I was told that was not service policy. I then offered to buy my own and wear it covertly. I was told this was against dress code. It appears that life is cheap in the ambulance service. Staff safety is of little consequence in comparison to overall cost.”

I strongly suggest we all review the current help and support we offer our font-line ambulance professionals and the urgent need for reliable, ‘operationally sensible’ and certified stab resistant vests. The key must be that any body armour issued must offer the highest possible level of blunt force trauma protection.  I suggest to view our very real video demonstration in which I am being subjected to all sorts of weapons ranging from knives, expandable batons, machetes, baseball bats, shanks and hypodermic needles. I finished the 3 hour test with no injuries sustained or any pain or bruising:

Please note… PPSS Stab Resistant Vests offer an UNLIMITED SHELF LIFE, compare to Kevlar based body armour that really should be replaced after 4-5 years. This offers an outstanding saving in the long run and its a reason why finance and procurement departments of government agencies around the world seem to love us.

I can only invite all key decision makers to sit down with us.  Let us discuss how we can help you effectively protect your colleagues.  One day we will look at a casualty.  One day one paramedic will not return home.  We don’t know when it will happen, but there is no question about it, it will happen.  The question I invite you to answer then is: “Have you really done your utmost to prevent this assault or incident… and what have you done to reduce the severity of the injuries your colleague has suffered?” 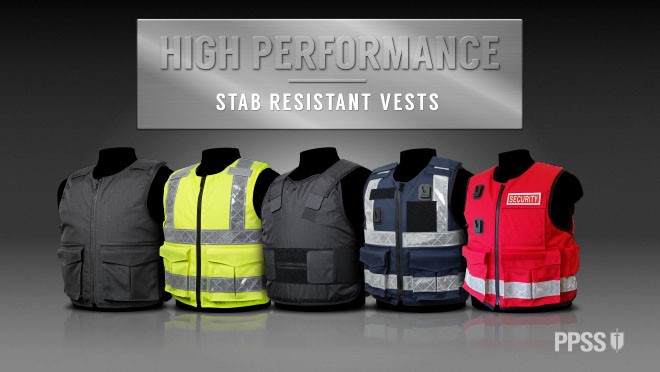 If you have any further in reference to this subject or any other type of high performance body armour, please visit www.ppss-group.com email my team info@ppss-group.com or call us on +44 (0) 845 5193 953