On Monday morning, the 18th April 2018, a 8 year-old boy left home with a kitchen knife and walked into his central Minnesota elementary school.  Minutes later he slashed three fellow pupils aged 8, 9 and 13 years-old, all of which requiring surgery.

I have explained in my previous article “The Rise of Global Knife Crime” to the best I could, why more and more criminals carry knives and why more and more terrorists utilise knives to reach their misguided objectives.  Above however highlights once again that one doesn’t require intense knife training to cause damage to others, and that you, as a homeland security professional or enforcement agent, must subsequently accept that anyone carrying a knife represents a real danger, even if he/she looks like he/she hasn’t got a clue what he/she is actually doing.

My firm PPSS Group have developed SlashPRO®, a specialised range of slash resistant clothing made 100% in order to effectively improve your personal safety, by offering cut and slash protection to highly vulnerable areas, to which common body armour do not offer any protection whatsoever. To help you understand why this type of PPE (Personal Protective Equipment) makes real operational sense, please allow me to explain some extremely important things about human anatomy and its relevance to combat… or in this case your defence and survival.

For the purpose of this article I will not go into the ‘stabbing’ motion/action of using a knife. I have extensively covered this in the past and will continue to cover this type of attack in dedicated articles in the future. The following really highlights the potentially irreparable and even deadly consequences of being slashed by either someone who knows what he/she is doing, or by someone who just wildly swings that knife and ultimately may well get ‘lucky’.

I do not claim to be a medical expert, hence please forgive me if something isn’t 100% medically accurate or precise phrased.  However, based on my understanding of this subject matter I can assure you that the following information is reliable enough to be taken serious, and for you to either consider issuing your team with slash resistant clothing, or indeed for you to consider wearing it whilst on duty.

Those who know how to use a knife effectively will understand when it comes to knife combat, stabbing and blood loss will not necessarily and quickly incapacitate an attacker. Combat expert and author Michael Janich did an excellent research on this topic, and after careful analysis of forensic data, modern trauma medicine and consulting with experts on this subject matter, Janich’s research concluded the very same.

In fact, in an article titled “The Realities of Knife Stopping Power” featured in a 2011 Guns&Ammo publication, Janich mentioned a case wherein a combatant received 50 stab wounds and still managed to fight for five minutes before collapsing due to collective blood loss, and I personally have witnessed cases of individuals who have survived multiple stabbings and made their way home without any assistance.

Things that matter in a self-defence situation

In a self-defence situation (or indeed in a situation where your operation requires you to incapacitate an assailant) every single second counts and can indeed make the difference between life and death. If you wound an attacker, but he still has the ability to do the same to you, you may still die.

When/if someone is knowledgeable enough and his intention is to immediately incapacitate you, you really have to understand human anatomy.

To hold anything in your hand, such as a baton, CS gas or shield (if you are a police officer), the muscles of your forearm contract and pull on the flexor tendons, which pass through your wrist and are attached to your fingers. If someone cuts or slashes the tendons or the muscles that power them, this connection is broken and your hand will no longer be able to close or to hold your baton, CS gas, shield or anything else you might be holding.

This concept applies to all muscle groups, tendons and limbs. If someone cuts or slashes the key tissues responsible for you moving a limb, he would most likely disable or at least severely hinder your limb’s function.  Sometimes this is referred to as ‘biomechanical cutting’.

Based on the above, your flexors tendons or muscles of the forearm, the biceps and triceps muscles of your upper arms, and the major quadriceps muscles just above the knee require reliable abd effective protection from such deliberate attack or cut.

Just above the knee, where the muscles narrow and connects to the patellar tendon, this area is typically covered by a just single layer of trousers material. It is a comparatively large target, and if someone is close enough to reach your body, that person will clearly also be close enough to reach your quadriceps. Cutting this target is called ‘mobility kill’… you will no longer be able to effectively defend yourself and hence it is extremely likely you will be defeated or eliminated.

Although many will claim that this approach doesn’t work, historical evidence from both sources around the world suggests very differently. Perhaps the best-known reference comes from the Filipino martial arts, which have a very highly evolved edged-weapon culture. Their key tactic is called “defanging the snake”… meaning targeting the attacking limb to destroy its structure and function. According to their symbolism, the weapon is the “fang” and the arm wielding it is the “snake.” Removing the fang from the snake immediately eliminates the primary threat to the defender… the attacker’s weapon.

In the traditional Filipino knife arts, aiming to cut the attacker’s wrist or forearm is one of the prime objectives. The goal is to sever the flexor tendons that connect the forearm muscles to the fingers, destroying the attacker’s ability to grip his weapon. Cutting the muscles on the inside of the forearm can produce the same effect.

Can you slowly see what I can see?  Can you see the risks involved when confronted by someone wielding a knife?  Most of us are concerned about being ‘stabbed’, but many trained specialists might have other plans… and that’s when slash resistant clothing starts making sense.

Human Anatomy or ‘Vulnerable Areas of your Body’

The below graphic and following bullet points will give you a reasonable understanding of the most vulnerable ‘slashing targets’.  Each ‘successful’ cut or slash can or will either lead to rapid blood loss and subsequent death (most likely caused by a) shock and b) blood loss, or dramatically decrease your mobility. However, please note below graphic does not feature all targets, but is simply a selection of some of the key targets of the front of a human torso. Targets trained professional will aim for to cause maximum harm, pain or death.

Due to the ‘worst case scenario outcome’ we strongly advice to look or re-look at the potential use of slash resistant clothing within your line of work. 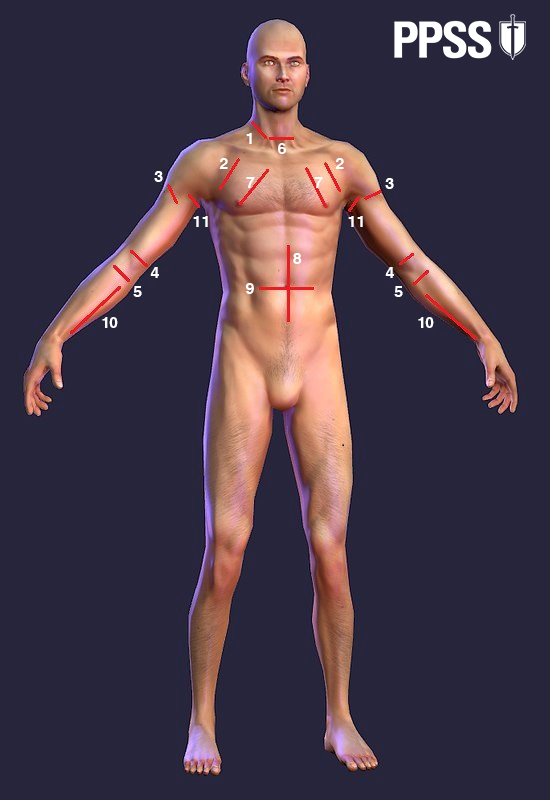 All of the potential injuries following any of the above highlighted cuts could be prevented.

For those who already wearing stab vests (bullet or stab resistant vests), I strongly recommend our slash resistant Combat Shirt or UBAC, offering outstanding cut and slash protection to many of the above highlighted vulnerable areas, to which your body armour will not offer any protection whatsoever. 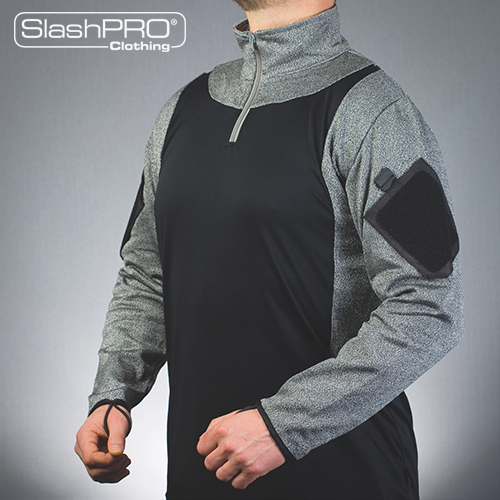 For those of you who are not wearing any type of PPE currently I would suggest you look at some type of garment offering 360 degrees of cut/slash protection, effectively preventing the laceration of arteries and veins i.e. our slash resistant jackets.

I haven’t written this article as a scaremongering tactic.

I haven’t written this article to provide those bad men/women who currently plan attacks on other good human beings with additional information to cause further harm or harm in a more effective fashion.

The objective for me writing this is based on my believe that there are men and women out there who have made a professional choice in their lives to protect other human beings, facilities, venues, events and infrastructure from the bad guys. I believe those men and women have the moral and legal right to be equipped appropriately, and this article simply highlights the risks and threat they face sometimes on a daily basis. Risks and threats the general public is not aware of or simply cannot see or comprehend.

“It is imperative that companies, and their management teams, have an overall process of risk identification, risk analysis and risk evaluation, forming part of a dynamic and up to date risk assessment. Once all the risks have been identified and evaluated, control measures and ‘treatment’ must be put in place in order to keep the residual risk as low as possible. Operational Management teams within companies have a legal obligation to ensure their staff and teams are provided with adequate equipment and measures. The context and Risk Assessment forms the base for all operational concepts and decision making.”

We at PPSS Group are extremely passionate about the safety of security professionals, and our mission is to let the world know that their safety can be improved dramatically, without compromising their ability to operate and function effectively.

The question simply is do you care enough?