According to their CEO Robert Kaiser, the decision in 2019 was based on the company’s comprehensive understanding of the most realistic operational risks and threats, faced by today’s private security professionals,

The firm’s product video, featuring him being subjected to a serious of attacks with knives, spikes and blunt objects is widely regarded as ‘physical evidence’ of its outstanding performance level and quality.

“Following years of relentless R&D we have concluded in 2019 that Polycarbonate as a raw material was simply no longer on par with the threats some of our men and women face. We had learn at that time to accept that improved knife and spike protection was indeed needed.”

“We concluded that carbon-fibre was the only real reliable and forward-thinking solution. Utilising the latest raw material and production technology made us understand what truly superior levels of stab and spike protection could be achieved.”

According to Kaiser, certified stab and spike protection is crucial, especially to correctional and prison officers who face some of the cruellest makeshift weapons, such as shanks and spikes daily.

Spike protection has now also become of equal importance to private security professionals, simply due to the type of weapons appearing on the streets in recent years.

Religious extremism, terrorism, social deprivation, immigration, a lack of respect and discipline, and an overall breakdown in society all had an impact on to the increasing number of knives and edged weapons being carried, and on the kinds of edged weapons essentially being used. 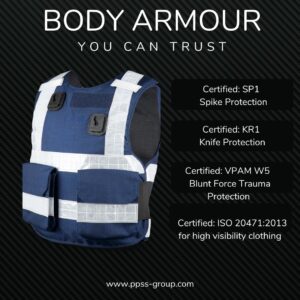 PPSS Group is an international firm specialised in the development, manufacturing and supply of body armour, offering unrivalled knife and spike protection. and protection from blunt force and even human bites. Social media presence: Facebook, LinkedIn, Twitter and Instagram.

Please contact us and let us help you and arrange a meeting with you and our Technical Director Colin Mackinnon, who following a distinguish 26 years career in the Police (Counter Terrorism, Surveillance, Covert Ops etc.) will be more than happy to advice you on the most appropriate type of body armour for your team.