Preventing the abuse and attacks and subsequent injuries on Parking Enforcement Professionals or Traffic Wardens has now become a real issue and task for many Local Governments.

Are you aware of the fact that hundreds of Parking Enforcement Professionals are being attacked every year here in the UK alone?

Did you know that work-related violence is a contributing factor to stress and absenteeism among staff costing UK employers £700 million annually.So, do I think that concealable and lightweight stab vests should be considered when discussing and evaluating how we can effectively help protect these men and women?

Yes I certainly do, and I say this absolutely regardless of the fact that I lead a firm specialized in the design, development and manufacturing of such equipment. I say it because I genuinely and simply care about human life and I would stress that it is crucial to look after those who operate in a ‘higher risk environment’ and those engaging with potentially hostile, intoxicated, frustrated, depressed or aggressive members of the public!

We know that a person who is either intoxicated, simply has a serious dislike for the organisation you represent or aggressively disagrees with any decision you are about to make can overreact to anything you say or do.  A lightweight high visibility stab resistant vest will protect you in such case from any impulsive physical assault such person might commit (and possibly deeply regret the following day for the rest of his/her life). 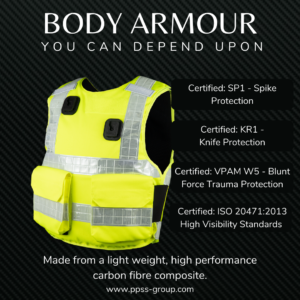 This following image highlights that a body armour does not always need to look ‘authoritative’, ‘offensive’ or ‘confrontational’.  We live in a society where a high visibility clothing has become the norm for workwear for many professionals.  This type of body armour can be ‘fine tuned’ with the corporate badge highlighting the name and logo of a Local Government and a badge ‘PARKING ENFORCEMENT’ can also easily be added to the back.

Truly outrageous physical attacks on Parking Enforcement Officers have been revealed in data released by local authorities across the UK and many other countries.

Statements of enforcement professionals, such as the following, have been recorded for several research projects on workplace violence within parking enforcement:

“I’ve been assaulted several times. Been involved in parking for 30 years. I was attacked with a knife many years ago. I was also robbed at knifepoint of car park takings. Broken ribs/driven at/ punched/ spat at/ pushed around. Abuse is general, not from any specific age or gender. Lots of ancillary abuse from passers-by.”

I can only invite everyone interested in this subject to read the dissertation: “An analysis of the extent of workplace violence in the Parking Enforcement Sector: A study of violence and abuse towards Parking Enforcement Staff in Bournemouth” by Michael A. Thompson. It is a truly outstanding piece of research!

Recent statistics released under the Freedom of Information Act also reveal incidents of council staff in the UK being punched, bitten, head-butted, attacked with pool cues and even suffering sexual abuse. Many of these attacks have resulted in injuries bad enough for the worker to require hospital treatment and often surgery. The media is full of reports covering these incidents.. but the following is certainly only a very brief selection of the many incidents that have made the news:

The most recent news dated 9th April is covering a incident, which saw two builders attacking a traffic warden, punching and kicking the victim until he falls to the ground.

We must admit these statistics and news of incidents are a stark reminder of the dangers faced by many public sector workers as they go about their work – often on relatively low levels of pay.

We will hopefully also agree that all of our public servants should feel safe to carry out their important work without the threat of physical and verbal abuse.

However, we also must accept the fact that the above can be classed as ‘wishful thinking’ and may well not be part of reality in today’s society… certainly not in certain parts of this country.

For this reasons appropriate and operationally sensible protection for these frontline professionals is something that needs looking at.

Who else is at risk?

To make it very clear, I am of course not saying everyone working for a Local Government is at risk of getting stabbed or brutally assaulted… of course not. This is of course depending on a number of factors e.g. are you working alone, time of work, location of work, and precise job responsibilities.  However I feel strongly that any public sector professional must have the right to be equipped appropriately.

I have stated it so many times over the past few years… but every time I speak to my staff I explain it again and again… we do not want to sell body armour based on the fear of our customers, we much prefer to explain that wearing a body armour can very well be compared to ‘wearing a seat belt in a car’.

We do not put the seat belt on because we believe we are going to have an accident today. We are simply acknowledging the fact that there is an exceptionally small chance that we might crash.. regardless of our driving skills.  We understand that someone else might be playing on his mobile phone, another driver could be drunk or simply not pay the required attention to the traffic, and such person CAN drive into your car… and it is without any question that you will have a higher chance of remaining unharmed in such unlikely, but nevertheless possible incident if you would wear a seat belt.

But we do not put the seat belt on because we believe we are going to have an accident today… we are not paranoid and scared or anxious. We are simply acknowledging the fact that there is an exceptionally small chance that we might crash. Yet, if this chance becomes reality, you have increased the chance of survival by wearing a seat belt.

Wearing a body armour is just the same…

Please also note that Canadian Parking Enforcement Officers are de facto Peace Officers. This means that assault on a Canadian Parking Enforcement Officer or Bylaw Officer conducting traffic bylaw enforcement is punishable under the Criminal Code of Canada as Assault on a Peace Officer and carries higher penalties than standard assault. Maybe this is something other countries can look into to ‘discourage’ other from assaulting these officers?

If you feel we can help please contact us.

Assaults on Frontline Security and Emergency Services During Lockdown

How Reliable Are Stab Vests?