Considering The Safety Of Prison Officers

I have a few friends who have worked in and around prisons over the past many years. I have listened to them over a couple of quite drinks many times and absorbed what is being laid out in front of me, and I must say, it is truly downright shocking how many officers have been injured, sliced, stabbed, beaten or otherwise viciously attacked.

This brief article is about the safety of corrections and prison officers, and it will highlight some of the risks and physical consequences associated to dealing with aggressive, dangerous, volatile, intoxicated, mentally ill or emotionally disturbed inmates, often with a history of violence.

“In the past year (2021), more than twenty prison officers have been assaulted at work every day on average.  No one should live with the constant threat or fear that they might be assaulted while at work. Yet those who work in the justice, custodial and immigration sector are all too often faced with that reality.” – Adrian Axtell, National Officer for the Justice and Custodial Sector at Community

The Big Risk: “The Bleed”

Most inmates attacks on prison officers result in physical injuries which often result in some level of ‘blood loss’. Understanding the subject of ‘bleeding’ is of reasonable importance, considering the probability of such event taking place.

Pretty much everyone understands their body and where you can find a pulse and how close it is to the surface of your skin. These key areas will cause a catastrophic haemorrhage when severed:

There is also the venous bleed, these are potentially shallower cuts producing a steady flow of blood, darker in colour than the arterial bleed. Still as significant as an arterial bleed. If there are a substantial amount of cuts to one area or person.

The small and lesser of the bleeds is the capillary bleed, this is where blood comes out slowly and in an even flow. Like when you grazed your knees as child.

But finally let’s not forget that internal bleed, the tricky one to treat! Any object used to penetrate the body deep enough can cause catastrophic internal bleeding .

The loss of blood is the most common cause of shock in casualties which can lead ultimately to death.  Are you aware that the average adult male can lose consciousness in about 30 seconds and then death in about 3 minutes if the bleeding is not controlled? This would of course depend on what area of the body has been cut and to what depth.

You would be shocked at what a single litre of blood looks like on the floor. 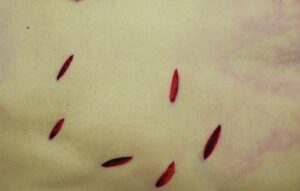 You know, all it takes is a small amount of initiative to make up some sort of made shift weapons that can be used to stab, slash or cut, and a prisoner is ‘good to go’ to cause horrific levels of damage and potentially even death. The below image just featured a tiny selection of weapons found in prisons.  As you can imagine almost anything anything can be turned an edged or pointed weapon i.e.broken glass, broken mirrors, broken ceramic tiles, sharpened bed or chair legs, pens and pencils, tooth brushes and razor blades etc. etc, etc. ANYTHING! 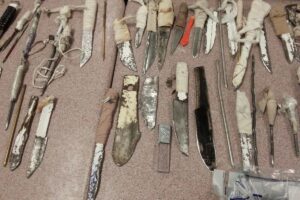 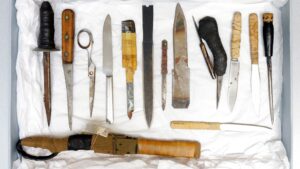 Blunt force trauma is the consequence faced by corrections and prison officers after being hit by a solid object, such as a fist, foot, knee, elbow, iron bar, wooden blank, brick, fire extinguisher, to name but a few, or indeed after being pushed hard against another solid object e.g. door, wall, floor or down a flight of stairs etc.

The severity of such injury is mostly determined by the speed, velocity, size and weight of the object, and can range in severity from a tiny bruise to internal haemorrhages, bone fractures, cardiac tamponade, airway obstructions/rupture, and in the worst-case scenario result in ruptured organs, rapid internal bleeding and ultimately death.

In this context, please read my recent article on “BLUNT FORCE : The highly underreported risk faced by security professionals.”

How do we prevent such injuries?

If we were to look at the daily wear of our prison and correctional officers would it be such a hard task to kit them all out in body armour? With the correct PPE I would like to think that many, or most of these injuries could be prevented or minimalised in some way.

PPSS Group’s carbon fibre stab vests offer certified and dependable protection from the majority of likely attacks a prison officer might face. They are officially certified against the most realistic threats, such as knives (CAST KR1), spikes (CAST SP1) as well as hypodermic needles and more importantly blunt force and impact (VPAM W5).  That’s protection you can truly depend on.

It goes without saying that the correct level of PPE to threat ratio would depend on what level of prison/correctional facility you are working in, your precise operational risks/threats and job responsibilities and what is already provided in terms of PPE.

High performance slash resistant clothing has also been developed and manufactured with the personal safety of prison and correctional officers in mind. Designed to primarily protect key arteries from laceration, subsequent rapid blood loss, it also prevents immobility (due to severed nerves, muscles or tendons). Slash resistant clothing has changed the world of personal safety over the recent years.

“New Zealand a few years ago changed its uniform from shirts/ties etc. to a more comfortable user-friendly t-shirt/cargo pants/boots. Recently they introduced stab resistant body armour and after some initial staff resistance, they are now nationwide and form just another part of the PPE and uniform to further protect staff from potential risk of serious injury or death. Contrary to speculation, they are not overly cumbersome or hard to wear and there appears to be no evidence they are provoking or intimidating to prisoners.”

In case you have any questions please contact us.

You can also contact my company’s Technical Director directly Colin Mackinnon. Colin spent 26 years in the Police (Counter Terror, Surveillance, Covert Operations and Firearms) and is frequently visiting our friends and customers here in the UK. He would be more than happy to meet with you too.

Assaults on Frontline Security and Emergency Services During Lockdown