In order for us to effectively help improve the personal safety of prison officers we must first remind ourselves that we cannot change the aggressive behaviour of some prisoners. There is simply no doubt that a prisoner consuming drugs, illegal substances or self-made alcohol can become hostile and violent within a split second, regardless of the prison or correctional officers excellent communication skill, calm personality and willingness to empathise with the prisoner.

At the end of the story an officer in such institution can be, and often is, the bearer of bad news. He might be required to inform the prisoner of any disciplinary, restriction of privileges, bad family news, cancellation of visits, or of the news that his/her cell will be searched, all of which can of course create all sorts of physical reactions.

We also need to remind ourselves that prisoners have got plenty of time on hand to develop tools and vicious weapon to carry out acts of aggression.  The ideas to create make shift weapons, e.g. sharpened table and bed frame legs, shanks made out of plastic, shanks made our of porcelain, sharpened wood or pieces of mirror, and the idea of melting razor blades into tooth brushes and turning pens, pencils and nails into ‘spike weapon’ have not been developed out of five minutes of simple boredom.  These ideas have been developed following hours and sometimes days, weeks and months of malicious thought processes, and even the very best prison or correctional officer can one day be on the receiving end of such malicious thought process.

Unfortunately it is a matter of fact that the personal safety and well-being of police officers is much more in the public eye, than the important service our prison officers provide and the dangers these professionals face every single day.  Somehow this is a little understandable (but wrong), as the public is certainly more keen to see police officers patrolling their neighbourhood and giving them a certain sense of security.  Prison officers on the other hand are much more ‘out of sight’ end hence they do get forgotten a lot.  I don’t know, but can you see the general public discussing the safety of prison officers, can you?  But, don’t prison officers deserve at least the same support, attention and respect like other frontline public services?

If one would ask 1,000 members of the public, who would they rather offer a salary increase, their local police officer or prison officer? I am most certain that in excess of 90% would select the police officer.  Why?  Because most people are selfish.  Those 90% wouldn’t believe the police officer deserve that increase, it is more that they would expect a better service and performance which would positively affect their lives. They would expect a safer home, faster response time when in distress, less anti-social behaviour and their properties and belongings being better guarded. Because they cannot see a direct ‘return on such investment’ prison officers needs and well-being is and will be overlooked too many times. 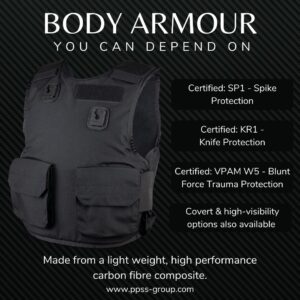 Stab resistant vests or body armour for prison officers in general are not about eliminating the risk of workplace violence related injuries, but about effectively reducing the risk within an environment where a risk has been identified.

I see the question about body armour for prison officers is being very similar to us wearing a seat belt in our car.  We don’t use a seat belt today because we know for sure we have an accident today. Neither do we use a seat belt because we are scared, paranoid, or worried that we might have a crash today.  No, not at all, the reason why we wear a seat belt is that we do understand that we have a much higher chance of survival in case someone is drunk, plays on his mobile phone or is otherwise distracted and crashes into our car, despite our own exceptional and advanced driving skills we might be able to claim.

Another question worthwhile answering when exploring the potential need/use of concealable body armour within correction facilities and prisons is how much do we actually really care about those guys ‘behind the wall’? Using my above analogy, if my child would be sitting on the back seat of my car I will make sure it is wearing a seat belt.  If the woman I love very much is sitting right next to me in my car I will also make sure she is wearing a seat belt.  But then having said that, some decision makers ‘do not allow’ their colleagues to wear a ‘seat belt’ or in this case any type of PPE, ignoring their concerns, fears and anxieties. For me this is absolutely outrageous!

So, how much do we care about the personal safety of prison and correctional officers? Are we actually willing to make a real difference to their risks and threats? Only YOU can answer this question yourself. More and more officers are raising their voices, yet their voices are not being heard.

I have also asked myself the following many times, is it not really questionable that police officers who deal with dangerous criminal individuals for only a very few minutes every day, usually during the arrest or approach of a dangerous member of the public (and often with a solid backup team) are by law required to wear body armour in most countries, but most corrections or prison officers charged with supervising the very same dangerous and brutal individuals, potentially for a number of years, are not being issued with any type of protective clothing at all? Do we really believe ‘that guy’ becomes a better human being when imprisonment?

What type of stab vests or body armour for prison officers could make a real difference to their safety?

For a number of professional reasons I have been part of many security related discussions with prison and correctional institutions in several countries around the world and please be assured I do 100% understand all operational risks and threats, as well as all concerns raised in reference to body armour.

In many of these meetings the ‘non-confrontational ‘, ‘non-aggressive’ or ‘non-threating’ design issue has always been the centre point of these sometimes very passionate discussion.

It interesting though, New Zealand introduced stab resistant body armour to their frontline staff and after some initial staff resistance, they are now nationwide and form just another part of the PPE and uniform to further protect staff from potential risk of serious injury or death. Contrary to speculation, they are not overly cumbersome or hard to wear and there appears to be no evidence they are provoking or intimidating to prisoners.

Anyway… the idea of a cosy and comfortable body armour, weighing only a few grams and being just a couple of millimetres thin, offering unlimited protection from every single possible threat simply doesn’t exist and may well not be available for many years to come.

So we need to decide what is the most realistic risk within our facility, department or specific operations, or indeed can we use a combination of different types of body armour to create the ultimate protection we desire?

Based on my in depth understanding of this subject we all need to understand that an assault resulting in blunt force trauma injuries is the most likely type of assault a prison officer will suffer. The second and third most likely assault will involve edged weapons or hypodermic needles.

Blunt trauma, blunt injury, non-penetrating trauma or blunt force trauma all refers to a type of physical trauma caused to a body part, either by impact, injury or physical attack via a kick, punch or blow using a blunt object.  How often will prison officers throw objects at a prison officer as an act of violence during ‘normal disturbances’, never mind serious riots? Assaults which lead to blunt force trauma injuries are exactly the type of assaults our prison officer face around the world, and I strongly believe the prevention of such injuries deserves our full attention.

Here is the first ‘problem’. The correct type of stab resistant vests offering substantial levels of protection from blunt force trauma will not be soft, flexible and ‘cosy’. Such body armour would be made out of a body moulded rigid material, such as a high performance carbon fibre, the same material that is used for motorbike helmets and baby bottles. Such material would also offer exceptional levels of protection from all types of edged weapons and very importantly also from hypodermic needles.

The second main advantage of carbon fibre based body armour is that it is very light, thin and reasonably concealable.  However, another massive unique advantage is they also offer an unlimited lifespan, as no physical, chemical or biological evidence even suggests that they will degrade. Their performance and protection levels will always remain the same.  This is of great financial importance as all other e.g. Kevlar® based body armour should/need replacing after five years due to a reduction of performance.  I certainly would throw mine away after such period of time.

Unless having undergone extensive edged weapon training, many or most prison and correctional officers will, by instinct, lift their arms and hands during a hostile situation, in order to protect the face and head. This is nothing to be ashamed of. In fact, it is normal, and only highly trained operators would respond differently and more effectively.

However, we must acknowledge that this ‘normal’ and ‘natural’ action would expose an extremely vulnerable area under your arms. A cut, injuring the auxiliary artery under your arms, can lead to rapid blood loss and even death. This is where knife resistant clothing stats making real sense.

CERT or Tactical Response Groups within prison services are equally at risks when dealing with major disturbances and require equal levels of protection.

In fact, a retrospective survey of hospital admissions data that contributed to the development of the standard suggested that 63 % of wounds attributable to sharp edged weapons were slash events. The most vulnerable areas were the head, arms, thighs and neck (Bleetman, Watson, Horsfall and Champion, 2003).

In case you have any questions in reference to this article or want to express your thoughts on our personal protective equipment and clothing for prison officers, please contact us.

Do All Stab Vests Offer Effective Protection From Hypodermic Needles?

How Reliable Are Stab Vests?